The School for Creative and Performing Arts (SCPA) was founded in 1973 as part of the Bronson desegregation lawsuit settlement against Cincinnati Public Schools. As the city’s public school system was being overhauled to afford all students an equal, free, appropriate and integrated education, the time was ripe to launch a truly unique school. This unique school would provide not only top-notch academic instruction, but also preprofessional arts training.

The founding principal was William Dickinson, then a CPS music teacher and strongly supported by CPS Superintendent Donald Waldrop and Cincinnati Boy Choir founder Bob McSpadden. SCPA moved in with the Mt. Adams Elementary School and welcomed students in grades 4-6, with arts classes in dance, vocal and instrumental music, visual art and drama. SCPA occupied the whole building in 1974, and by 1975, it expanded into the adjacent Immaculata Church building to accommodate a skyrocketing enrollment and more dance, band and gym classes. The first big show, later known as the major musical, was Babes in Toyland. It was performed at the CPS Education Center, then located on Ninth Street, downtown.

With further growth in 1976, SCPA moved to Summit Road in the Roselawn neighborhood, where the school’s activities were divided between three buildings: Chabod House, for classes and office space; the basement of the Lutheran Church, which served as the cafeteria; and the Jewish Community Center, for gym classes. There were no lockers so, as students traveled from building to building, rain or shine, they carried all their belongings with them. This daily “journey” continues to be commemorated during Class Day as seniors include a walk outside as part of their final pass as SCPA students.

In 1976, another move was necessary to accommodate the growing needs of the school. SCPA moved into 1310 Sycamore Street, in the Pendleton neighborhood near downtown, and began sharing the former Woodward High School building with Abigail Cutter Junior High School. SCPA used the third and fourth floors while Cutter continued to operate on the first and second floors. The auditorium, cafeteria, gym and playground were shared by both schools. The Shop, a fundraising project of The Friends of SCPA, debuted at this location, as did the position of artistic director, inimitably performed by the multi-talented Jack Louiso, who went on to found the Cincinnati Children's Theatre in the 1990's.

The Pendleton location was perfect for SCPA, both historically speaking and mission-wise. There had been a school on the Sycamore site since 1831, which was the first public school west of the Alleghany Mountains. The great abolitionists Levi and Katherine Coffin also lived on the property, causing there to be remnants of Underground Railroad tunnels underneath the building to this day. SCPA’s mission to educate all talented children in the arts is cut from the same cloth as these past humanitarian endeavors. 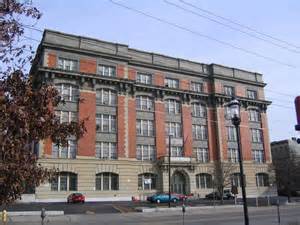 In 1978, SCPA finally occupied the entire building (pictured at right) and, in 1979, graduated its first class of seniors. The Class of '79 was the first and last class to hold its graduation ceremonies in the school's auditorium. The Class of '80 was the only class to graduate in Eden Park at the Pavilion. The Class of '81 made history as the only class to graduate in the ballroom at Music Hall. The Class of '82 was the first class to include so-called "survivors," students who had been at SCPA since grade 4, and the first of many to have its commencement ceremony in Music Hall's auditorium. Early in the 21st century, SCPA began graduating from the Cintas Center at Xavier University.

In 1981, the entire cast of SCPA's The Wiz was invited to perform at The National Theatre in Washington, D.C., where a yellow brick road was created just for the occasion. SCPA performing groups toured Europe on several occasions, and took an original multimedia production, The Book of Five Rings, to Gifu, Japan in 1999.

The school suffered a blow on April 18, 1996, when an arson fire destroyed the theatre and almost burned down the building. School closed for a few days, but enough repairs were made to finish the school year, although it was eerie to have the theatre doors locked and the space marked off limits. The school community rallied under the banner of Fireworks! and presented an outstanding medley of performances at a fundraising gala at the Aronoff Center, downtown. Renovations were completed by September, and, SCPA, like the phoenix, rose from the ashes, better than ever.

In 2008-09 and 2009–10, the school was featured in the MTV reality series Taking the Stage, filmed at the school and starring SCPA students. In Fall 2009, 10 SCPA students were invited by the First Lady to perform at the White House. In August 2010, SCPA combined with the CPS' Schiel Primary School for Arts Enrichment to create the first kindergarten through twelfth grade (about ages 5 to 17) arts school and first private sector/public arts school in the U.S. The new $72-million facility in Over-the-Rhine, which opened in August 2010, was championed by the late Cincinnati Pops Maestro Erich Kunzel and funded through a unique public-private partnership that raised more than $31 million in private contributions to match public funding. The building features specialized facilities for the arts, and three separate theaters, and is a key component to redevelopment plans for the neighborhood.

SCPA students and faculty continue to present on great stages around the country, including Carnegie Hall and the Kennedy Center; at prestigious adjudications, like the World Piano Competition; and have been invited to appear internationally at such gatherings as the American High School Theatre Festival in Edinburgh, Scotland.

Schiel Primary School for Arts Enrichment (PSAE) opened in Fall 1985 in Corryville at 2821 Vine Street. For the first two years, the space was shared with CPS' Academy of World Languages. The PSAE program exposed students, kindergarten through third grade, to the fine arts, including art, music, drama, dance, writing and Suzuki strings. Enrollment started just below 200 students and grew to more than 400 students as the program prepared to join The School for The Creative and Performing Arts (SCPA) in 2010.

A public school had been located on the Vine Street site since before the Civil War. The building was known as the 23rd District School until 1942 when it was renamed for Dr. Louis M. Schiel, principal of the 23rd District School from 1885 until his retirement in 1927. Louis Schiel was a great believer in lifelong learning. After he became an educator, he attended medical school where he was valedictorian of his class. The school building was a neighborhood school, the German language magnet, AWL, and finally, 25 years as the home of the Schiel "Stars."

Schiel Primary School for Arts Enrichment demonstrated a tradition of excellence after its reorganization into an arts school. Schiel received an Excellent designation from the State of Ohio for four of the eight years that such classifications were awarded, and, in its final year, Schiel was recognized as a Blue Ribbon School by the U.S. Department of Education.